News of Those Once Affiliated with the Global Church of God

Since the November 1998 takeover of the old GCG by the board in the U.S., those once with GCG went to many places. Most of the members and ministers ultimately went with the Living Church of God (LCG), 8-15% went with the Church of God, a Christian Fellowship (CGCF) and smaller percentages ended up with David Pack's Restored Church of God (RCG), Harold Smith's Church of God Fellowship, Northwest (CGFnw), the Continuing Church of God (CCOG), and other groups (at least one which is outside the U.S. uses the term Global Church of God). On July 1, 2001, eight ministers resigned from CGCF and formed the Church of the Eternal God (CEG), similar in name, but not related, to the Eternal Church of God (ECG--founded by a minister removed from the original GCG ministry for impropriety). About a month later CGCF (USA) dissolved and most then with it ended up in the United Church of God (UCG). One former GCG minister (Ronald Laughland) became pastor of the Wholeworld Church of God. In 2004, Raymond McNair, having been in GCG, CGCF, LCG, then went on his own and formed Church of God, 21st Century (COG21); later he died and that group disbanded. Don Haney, once in GCG/LCG, formed the Church of God In Peace and Truth. In 2005, Ben Faulkner, who was in GCG/LCG, formed the Church of the Sovereign God (CotSG). In 2006, Charles Bryce who was in GCG/LCG left, and formed the Enduring Church of God (En COG). In 2010, several of the main leaders who went to UCG from CGCF left it and went to a group called COGWA. A couple of people, like Norman Edwards (Servants' News/Shepherd's Voice), left GCG well before the 1998 takeover (he has 'Nashville Christian Media'). In 2013, Rod Reynolds left LCG and formed COG Messenger. On 12/15/11, a minister in good-standing with LCG anointed Bob Thiel with oil and prayed that God would grant him a double-portion of His Spirit (see also How To Determine If Someone is a True Prophet of God): and things have not been the same since (Bob Thiel still, of course, supports the goals and biblical beliefs of Philadelphia era of the Church of God). Website links for most of those who were once part of GCG and that have websites can be found at the COGlinks page. In 2012, certain heresies were officially introduced, accepted, and/or promoted by LCG. After concluding that insufficient value was placed on the truth (and keeing their word) by certain leaders of LCG and that they no longer held to biblical church governance and could not as is be used to lead the final phase of the work (see also Why Bob Thiel Left the Living Church of God), on 12/28/12 Bob Thiel was led to form, and then announced, the beginning of the Continuing Church of God (CCOG). CCOG is the second largest group, in terms of members, of those groups whose leaders were once part of GCG (LCG is largest). This page reports on those groups that somehow once had ties to the old GCG.

01/23/20 a.m. Financial priorities are one way that the Continuing Church of God differs from other groups. The following is from the CCOG Letter to the Brethren: January 23, 2020:

Jesus said, “where your treasure is, there your heart will be also” (Matthew 6:21).

In the CCOG we really do focus on others and reaching the world with the gospel of the kingdom of God.

Recently, someone asked me if we would provide additional details as to how the US office of the Continuing Church of God spends the funds it received. 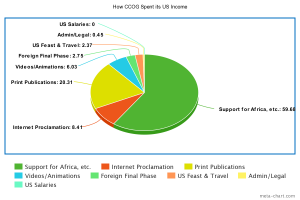 Yes, most of our money goes to support the physically and spiritually poor as we work to fulfill Matthew 24:14, Romans 11:25, the Ezekiel Warning, and Matthew 28:19-20.

1. Support to Africa includes paying for ministerial expenses, gospel proclamation, travel, printing literature, certain translations, distributing literature, meeting space assistance, supporting the poor (Galatians 2:10; Romans 12:13; cf. James 2:14-16; Hebrews 13:16; Isaiah 58:7; Proverbs 28:27), including widows and orphans (James 1:27). And yes, since we print and distribute literature in Africa, we spend more on literature production than is shown in item 3. Support ‘for’ includes expenses paid to people who were traveling to some of these places. Funds to Serbia provide ministerial and other support, including producing materials (mainly electronic) to reach and teach people, not only in Eastern Europe, but also around the world. While most of the direct support for Haiti comes from the Canadian office, the USA office helps advise on this, as well as has not asked for funds to reimburse for literature it produces and sends to Canada in order for that office to better be able to provide support for Haiti. Mexico expenses were related to sending Louis Rubin to visit as well as paying expenses related to the Feast of Tabernacles there. Philippine expenses were mainly related to sending Jay Chiang to handle a funeral as well as some expenses related to the Feast of Tabernacles there. The vast bulk of the money in this Support category goes to Africa as that is where the vast majority of our members reside and where many fruits are being produced.

2. Internet proclamation includes paying for servers, URL fees, and our Google campaign to reach people around the world. The Google campaign has now made 178 million computer impressions with parts of the Philadelphian message.

3. Printed publications include the production, printing, and distribution of the Bible News Prophecy magazine in various languages as well as various books and booklets. The costs here also include formatting non-English literature in forms that it can be available on the internet as well as forms to allow it to be printed in the USA and Africa.

4. Video and animation production covers the costs to produce the BibleNewsProphecy videos, CCOG animations, the Behind the Works video, and the creation of DVDs that are sent to some international locations for the Feast of Tabernacles. It also, sometimes, includes cost for sermon production–but those costs are negligible.

6. US Feast of Tabernacles’ costs include what the hotel charges for the meeting room and some travel and other expenses. This category also includes other travel, which tends to be low. An example of US travel would be costs associated with Deacon Richard Close making a baptizing and counseling tour.

7. Administration and US legal expenses. This tends to include a few office supplies, mandatory government fees, and telephone costs. US legal fees for 2019 consisted in my contacting a copyright attorney to ask about the viability of producing youth Bible lessons that another church once copyrighted–this was a very small charge. My business office does NOT charge the CCOG for use of space, electricity, postal machine use, etc. Now, it should also be mentioned that for those who send funds via PayPal, PayPal deducts between one – three percent and those costs are not reflected here as we used the example of someone sending a US check. Let it be pointed out that PayPal is still the most cost-effective way of sending US dollars from outside the US and is also conveniently effective for US supporters that use it.

8. Salaries are not paid to leaders in the USA. People such as myself, Richard Close, Steve Dupuie, Louis Rubin, and Terry Nelson (who is about to go to Africa on CCOG’s behalf) are not paid—we all have freely donated time. Nor have we paid their spouses. Nor have we funded any retirement nor health insurance plans. It is not that we would not consider having a paid US ministry, but we had none in 2019. (Note: We did not list all our unpaid USA volunteers, only those that we from the Grover Beach office have requested to travel on CCOG’s behalf).

It appears that never before in Church of God history have so few helped so many with so little for so long in order to have the impact that the Continuing Church of God is having.

We strongly believe that whatever you send is well spent to support the Philadelphian remnant as we work on Matthew 24:14 and Matthew 28:19-20 while we strive to be ready for the short work and our part in the final phase of the work.

Hear the words of Jesus:

2 … The harvest truly is great, but the laborers are few; therefore pray the Lord of the harvest to send out laborers into His harvest. (Luke 10:2).

Pray for more laborers for the harvest. Thank you for your support.

The Bible contains numerous passages that deal with the future of Iran, which was formerly known as Persia. Most commentaries and encyclopedias are in agreement that the modern-day Iranians are descendants of the ancient Elamites. For instance, Strong’s Exhaustive Concordance of the Bible equates Elam with Persia.

Genesis 10:22 and 1 Chronicles 1:17 state that Elam was a son of Shem, and therefore, a brother of ancient Asshur or Assur. The city of Sushan or Susa was one of the capitals of the Elamite or Persian Empire, and Esther, Daniel and Jeremiah resided there at times. Susa is today known as Shush—a city in modern-day Iran. ...

In this context, we should note that in the near future, Iran will participate in fighting against the state of Israel.

Isaiah 22:6 prophesies, in the context of the future enslavement of the inhabitants of the city of Jerusalem (compare verses 1-4):

“Elam [Iran] bore the quiver With chariots of men and horsemen, and Kir uncovered the shield.”

Despite having several prophetic errors, it is good that CEG seems to understand about Iran and tying it in with the prophecy in Isaiah 22. For more on Iran, check out the article .Iran in Prophecy.